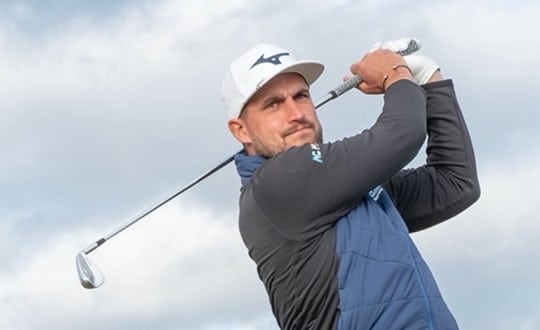 It has been another busy week for golfer and Isle of Man Sports Ambassador of the Year, Tom Gandy, as his secured another milestone on his professional CV by making his first halfway cut on the full European Tour at The ISPS HANDA UK Championships. The playing category he achieved at last year’s Qualifying School in Spain earned him a starting berth on the Tour’s ‘UK Swing’ for a second week in succession, seeing the Manxman tee up alongside some of the most famous names in the sport, including major winners Danny Willett and Martin Kaymer, and Ryder Cup legends Lee Westwood and Thomas Bjorn.

Getting his round underway in the afternoon on Day 1, Tom coped well with the poor playing conditions which were the result of Storm Francis, which was lashing wind and rain across most of the country. After a few weather-related interruptions, he was hovering around the predicted halfway cut mark after 10 holes when play was finally suspended for the day as the delays to play caused by flooding in some of the greens meant that those who had teed off later in the day simply ran out of daylight. Although relieved to get back into the Clubhouse and dry off, this meant an earlier than expected start to Day 2, and an additional 8 holes for the Manxman to complete on the Friday, knowing that he would likely have to improve on his current 1 over par figure to make it into the weekend.

The knock-on from Day 1 was a 7am start for around a third of the field on Day 2, with Tom heading out to the 11th tee to get his challenge underway once again. Keeping a cool head in the still soggy early conditions, he safely negotiated the rest of the round in level par to card an opening round of 73 and leave him well-placed to push on in the second round. Push on he most certainly did, as he followed two birdies on the opening nine holes with a further 3 on the second nine, to post his best score to date of his European Tour career – a 4 under par 68 – and comfortably qualify for the last two days of the event, sitting just outside the Top 20 and only a handful of shots behind the halfway lead. Although he wasn’t quite able to repeat the highs of Round 2 over the weekend, there was still no shortage of birdies for Tom’s followers to cheer and his eventual total of 2 over par for the tournament saw him finish in a Tie for 51st place, his highest finish to date in the European Tour and his first pay day at that level. Crucially, he also had the benefit of playing with Tour event winners on each of the four days, an experience which will surely help to prepare him for winning opportunities that undoubtedly lie ahead.

“It was nice to make the weekend for the first time in one of my first starts at the top level and, whilst the weekend didn’t go as well as I would have hoped, it was another step in the right direction and a good opportunity to further gain confidence playing at that level.”

There was little time to rest on his laurels, however. With the ‘UK Swing’ now complete, the European Tour now moves on to Spain and Portugal for the next few weeks and, just as Tom was packing his car and checking the SteamPacket sailing schedules to return home to the Island, he received an email from the Tour’s Player Relations team confirming his place in this week’s event, The Estrella Damm Andalucia Masters, to be held at famous Valderrama course in Spain. Like The Belfry, Valderrama is an iconic venue within the sport and is synonymous with the Ryder Cup, being the first course in continental Europe to host the event in 1997 when golfing legend Seve Ballesteros famously captained the European team to victory over the US. With a Prize Fund of €1.25M on offer, this presents Tom with another outstanding opportunity to put the Manx flag firmly on display on the Leaderboard and establish himself as a genuine competitor at this level.

“I look forward to every chance I get. It is hard to say when the starts will come along with all the uncertainty over events and all of the complications around travel and COVID, However, my job is to be as ready as I can for when that opportunity arises.”

Tom tees off at 2.10pm on Thursday and 10.10am on Friday (both UK time) and you can follow his progress on the European Tour App and Website, and via the TV coverage on Sky Sports Golf.