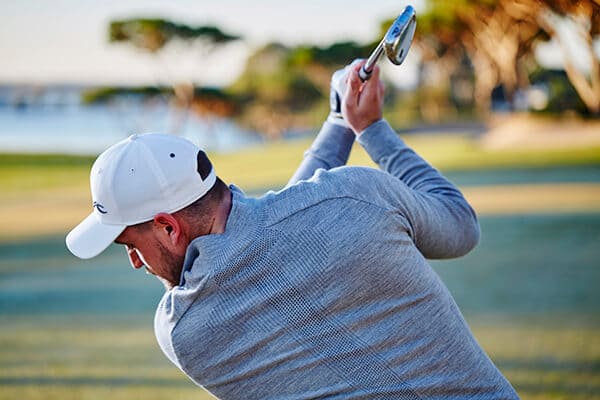 I met with Sian to discuss my Portugal trip and to discuss building on this to continue to prepare me for the season ahead. I also met with Conor Cummins for a Masterclass again involved with the mental side of sport. I found this very informative, enjoyed the chilled out/casual environment and the open forum. Conor was great answering everyone’s questions and I felt it was good to hear how a successful athlete deals with adversity, what he feels works for him etc. Even though it’s a completely different sport I think I can still learn a lot.
I went to Portugal for some warm weather training, but before going decided to enter an event on the Portugal Pro Golf Tour for the final three days of the trip – I thought, what better way to put your practice to the test than to jump in to a competition?

Prior to arriving in Portugal I had a lesson with my coach in Southport, which helped inform my plan for the three days. I worked tirelessly whilst there and felt like I really got a lot from the three days.

It was really great to get back in to a competitive environment, something I feel I have missed (having not played a tournament since the end of September 2017). The field of 100 players was strong, particularly as the Challenge Tour season has not yet started so several players from this Tour were playing as a means of gaining competitive experience, as was I.

Whilst my expectations were initially low, I started very well and kept trying to push on, knowing scoring would be low. Day 1 was great, but I missed a few good chances coming in and had to settle for -3. Day 2 was a slow burner, nothing seemed to happen and I was drifting away, but a strong finish meant I jumped back up the leaderboard. I also managed to pick up my first pay cheque since turning professional (my second start) so that felt good and capped off a very productive week.