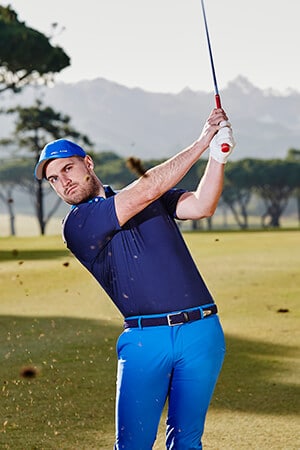 The Albatross is not famous for being a symbol of good luck. However, in golf it is a very rare bird indeed, equating to a score of 3 under par on a single hole. That means a hole in one on a par 4, or – more often – a two on a par 5. For the statisticians out there, albatrosses are roughly 100 times less common than holes in one – the odds going from around 12500-1 for a hole-in-one, to around a 1000000-1 for an albatross, or ‘double-eagle’ as it’s known in America. In their respective careers, legends of the game Arnold Palmer and Tiger Woods have had two each, neither in tournament play.

So when Tom Gandy stepped up to his ball in the practice round at last week’s Nokia Masters in Sussex after hitting a monster drive down the 17th fairway, he might have thought he was in good shape to reach the green. He would have expected to walk off with a birdie, possibly even giving himself a putt for an eagle. He did not expect to see his ball disappear into the right hand side of the cup for such a rare score. 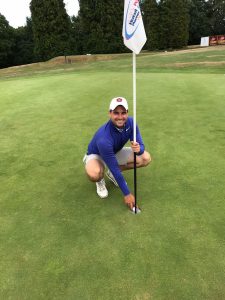 Tom picking his ball out of the hole after his albatross in practice.

However, like Coleridge’s Ancient Mariner, this albatross didn’t seem to bring Tom any luck for the remainder of the week. Despite striking the ball very solidly on Day 1, a couple of loose shots – and a stroke of terrible luck with an unplayable lie in a bunker on the 13th– cost him dearly as two unfortunate double bogeys on his card saw him finish well down the field. A great start to Round 2 sadly came to an abrupt end in the torrential rain when play was suspended due to the storms. Again luck was not on Tom’s side – by a matter of 10 minutes this time. He was -3 for the round starting the 12th, only to see the club slip on his tee shot and his ball end up in the woods, leading to his third double bogey of the week. To add insult to injury, the klaxon to suspend play sounded just as he finished playing the hole. With the tournament shortened to 2 days, this left little chance for Tom to play himself back into the money although he did come back on the Saturday and play the final 6 holes in 1 under par for a very respectable second round of 70.