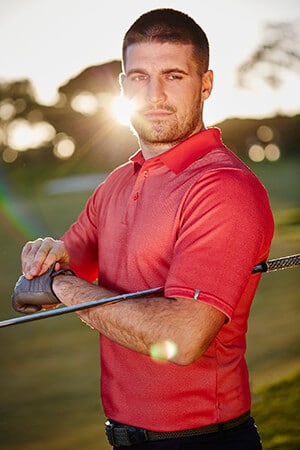 After an increasingly set of positive results over the first half season on the EuroPro Tour, Isle of Man professional golfer Tom Gandy finally scored his first Top 10 finish in the summer sunshine in Berkshire at last week’s Pentahotels Championship at Caversham Heath Golf Club. Tom got off to a great start to the week by leading his Pro-Am team to victory on the Tuesday, picking up some welcome Prize Money in the process, before showing the maturity and experience he has built over the first half of his rookie year with some really consistent scoring to end the week just three shots away from a maiden victory on the Tour. 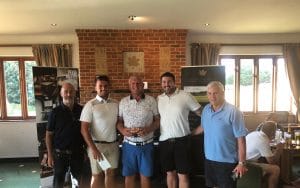 Tom with his Pro-Am Team

Tom was especially pleased to have such a strong finish on the Friday, carding a 68 – the third best round of the day – and climbing a dozen places up the leaderboard.

“I was delighted to piece three rounds together as previously this season I seem to have one mediocre round that holds me back.”

Playing an hour or so in front of the last pairing, Tom managed to get to within 2 shots of the lead with 3 holes to play but just couldn’t find any more birdies to put pressure on those behind, allowing overnight leader Jordan Wrisdale to hold on and clinch victory with a total of -13. However, there were lots of positives for Tom to take from his week’s work. As well as his first Top 10 of the season, the birdies were flowing each day with 15 in total across the three rounds.

“I’m feeling more and more confident out there each week and really enjoying my golf, so it felt like it was only a matter of time until the results started to come. I will try to use the positivity and momentum and roll it into the next event.”

This finish propels Tom up to 47th Place in the ‘Race to Desert Springs’ Order of Merit, with the Top 60 players qualifying for the end of season event at Desert Springs Golf Club in Almeria in Spain over the 24th – 26th of October. The composure he showed on the final round, keeping his card bogey-free while finding 5 birdies will surely give him confidence to push on for the last 6 events of the regular tour and hopefully a place on the first tee at Desert Springs for that end of season finale.