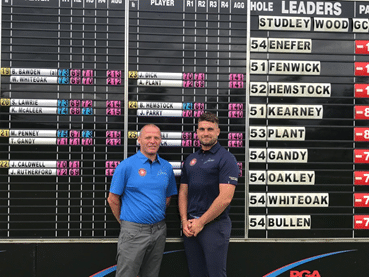 Manx golf star, Tom Gandy, continued his excellent recent form this week with his second successive Top 10 finish on the PGA EuroPro Tour in the Professional Darts Championship sponsored event held at the Studley Wood Golf Club in Oxfordshire. Despite some blowy conditions over the 3 days, Tom kept up the momentum from his career-best finish the previous week, again striking the ball with conviction and precision. Brimming with confidence after his first EuroPro Top 5 finish in the Irish Masters less than 7 days earlier, he was on the pace from the very first tee, shooting three sub-par rounds of 71, 71 and 70 for a 7 under par total, 5 shots behind eventual winner Billy Hemstock.

However, the final Leaderboard did not quite tell the full story as Tom’s excellent start to the closing round saw him in a tie for the lead after 3 excellent birdies in his first 5 holes. However, a combination of the leaders playing behind him starting to rack up the birdies ,and an unlucky start to the back 9 where an aggressive birdie putt on the 10th green raced past the hole and turned into a heart-breaking bogey, effectively ended Tom’s hopes of a maiden EuroPro victory. Despite this disappointment, Tom gathered himself to ‘go again’, finishing strongly with 3 birdies in the final 3 holes to cement a second consecutive Top 10 finish and end the week Tied 7th, a result which saw him climb another 9 places in the Tour Order of Merit to 33rd position – a career high – with only one week of the regular season to play. Although his qualification for the end-of-season Tour Championship in Spain was already fairly secure following last week’s result in Ireland, this is now mathematically confirmed and another good finish in Aberdeen in two weeks will likely see him finish in the top half of the 60 qualifiers for that event.

Speaking after his round, Tom said “This was another strong week and further evidence that all of the work I’ve been putting in off the course with my coaches is starting to pay off. It was tough going earlier in the season and having to stay patient and wait for the results to come was hard but now I feel that it’s paying off and it feels great to confirm my place at Desert Springs.”

Tom has been supported by a number of large and small businesses from both the Isle of Man and the mainland over the season. However, this week’s event sponsor, Anthony Collis Flooring, had a more hands-on approach than normal. As he did for a couple of events last year, Anthony acted as caddy for the week, as well as providing Tom with accommodation at the Blue Tin Farm Shop, the family business based just over the border in Berkshire.

Tom added “I was really grateful to have Anth caddying for me. We have a good record together and we have a great craic out there which is important as, even when I was dropping a few shots ,he managed to keep me entertained and relaxed, rather than dwelling on any bad shots.”

As well as the birdie-birdie-birdie finish, Tom had another reason to smile on the final day. Some light traffic on the road back to Liverpool meant that he made the early evening SteamPacket crossing back to the Island in good time for the weekend – and to enjoy a well-earned week off back home.