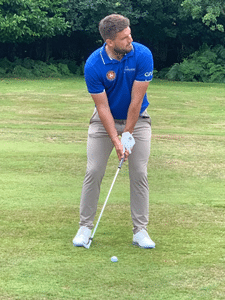 As the PGA EuroPro Tour approaches the ‘business end’ of the season, things are starting to come together for the Island’s Tournament Pro Golfer, Tom Gandy, as he appears to be running into a rich vein of form at exactly the right time. It has been a rather roller-coaster ride since his first Professional victory at the Royal Ascot Cup back in May , a memory that was beginning to seem a long time ago after a frustrating run of missed cuts on the EuroPro left him scratching his head and wondering where his next success would come from. However, following a mid-season reset, three Top 20 finishes in the past 5 events have seen him climb into the Top 60 berth in the Tour’s Order of Merit which he needs to once again secure his place in Spain for the end of season Championship, The Race to Desert Springs, held in Spain in October.

Following last month’s finishes of Tied 8th in the Motocaddy Masters, held at Linden Hall in Northumbria, and Tied 16th in the Eagle Orchid Scottish Masters, at Spey Valley in Inverness-shire, the start of August saw Tom return to Mannings Heath Golf Club in West Sussex to compete in this year’s renewal of the Nokia Masters event. – a staple on the EuroPro circuit. The course was in pristine condition and, following an opening day of light winds, glorious sunshine, and low scores, Tom found himself lying just outside the Top 10 after an outstanding back nine of 31 shots helped him card a 5 under par 67 – a score that could easily have been several shots lower as a combination of impressive consistency from the tee and some spectacular iron shots saw a plethora of birdie chances come his way. Days 2 was much harder, however, as the conditions turned stormy, and much less conducive to birdies. As a result, the field started to bunch up as scoring became more difficult and the challenge to players was more about protecting their position, rather than the all-out attack of Day 1. Despite the conditions, Tom held his position and shot a very respectable one under par 71 to hold his position and keep his chances alive for a final day challenge.

As the last round got underway the weather again looked challenging, although as Tom described it “..even windier than yesterday, but still just a standard Manx summer day…”. Again, conditions started to bunch the field up and, as Tom approached his final 6 holes, he was sitting inside the Top 10 and just 3 shots behind the leader. Sadly, a combination of a couple of crucial putts from Tom sliding agonizingly past the hole, and some good birdies from the leaders who were following a few holes behind, meant that Tom finally finished in a Tie for 12th place, 5 shots behind winner James Ross. However, this result was enough to lift him into the Order of Merit Top 60 as, with 5 events left to play, the real jockeying for position starts as players try to cement their place on the first tee at Desert Springs in October.

As a result of Tom’s improved form over the past few events, he was rewarded on his journey away from West Sussex following the event by an email from the Challenge Tour, offering him a place in this week’s ISPS Handa World Invitational Event to be held at Galgorm Golf Club and Massereene Golf Club in Ballymena in Northern Ireland. This late-notice schedule change took some logistical quick-stepping, but within a few hours Tom had manage to rearrange his plans to allow him his first foray onto the Challenge Tour – the next level of competition above the EuroPro events and only one tier below his ultimate goal of earning a full European Tour card and taking the Manx flag to some of the biggest tournaments in the world to compete against the top names in the sport. The event boasts a prize fund of $250000, approximately five times the amount the players compete for each week at the EuroPro events. Anyone interested in following Tom’s progress over the next 4 days can use the following link:

It’s fantastic to see the Manx flag flying at this next level of competition, and I’m sure the whole island will get behind him – especially if he can get himself into contention again for the final two rounds at the weekend.