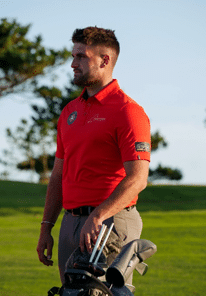 They say that “..form is temporary, but class is permanent..’. Over the past few months, Isle of Man pro, Tom Gandy, has shown plenty of both as he continues what looks to be a relentless march towards realising his dream of competing at the very pinnacle of his sport on golf’s European Tour. His latest success, a third place finish in the penultimate stage of qualifying for that coveted playing card on next year’s European Tour, means that Tom has now notched up and incredible run of 7 consecutive Top 10 finishes in all events since The Irish Masters in late August, including the final three events of the regular EuroPro season, the end of year Tour Championship, and the first two Stages of ‘Q School’, the qualifying process to progress to the ultimate prize in European golf. This incredible run of form leaves Tom only 6 rounds away from his dream, as he tees up in Spain starting on Thursday for the most important week of his life, seeking to earn the right to compete alongside the likes of Rory Macilroy, Justin Rose and  Sergio Garcia at events all around the globe.

The Stage 2 event held at Alenda, near Alicante, in Spain was scheduled to finish on Sunday, but some very un-Spanish weather – especially the wind – wreaked havoc with the timings and saw players have to return on the Monday to complete their 4 rounds. However, Tom’s experience and recent confidence ensured that the delay didn’t faze him and he showed real composure in his last dozen holes to pull himself comfortably out of the pack and ensure he was ell inside the Top 20 required to progress to Stage 3.

“I was one under par when the wind kicked up on about the 7th hole and things got tough. I had no idea of what the scoring would be like, and I missed chances on the 7th, 8th, and 9th. The 10th and 11th were directly into the very strong wind and, after safely negotiated the 10th for par, my 6 iron into the 11th green came out flush and straight at the flag, finishing 6 feet away from the hole. I rolled that putt in, then birdied two of the next three, which let me relax and enjoy the closing holes – even though they were into the now ridiculous, Rowany-esque wind.”

This latest success was the culmination of a long, tough week as a number of delays due to the wind meant that players were taking three days to play a single round at one stage. Fortunately for Tom, he had plenty of support to keep his mind off the delays and help him stay in the zone.

“I had my brother Jay with me, who was amazing, keeping spirits high and then making me quickly refocus when it was time to go back to work. I also had Ant and Helen Collis out to cheer me on, friends who have been incredible supporters for a number of years so it was great to have them there to watch. I was pleased with my performance, in spite of the tough conditions, in what is probably one of the biggest tournaments I’ve ever played in and hope that I’m doing the island proud, including my unbelievably supportive family and girlfriend!”

This Q School Stage 2 success came hot on the heels of a really solid performance in the Tour Championship event a little further down the Spanish coast at the Desert Springs resort. A fantastic first round had put him bang in contention and it is a measure of how far Tom’s expectations have risen that his eventual Tied 10th finish was almost a disappointment. However, it was enough to cement a Top 30 finish on the season’s Order of Merit – no mean feat considering he had a poor start to the season and the disproportionate pay cheques that winning attracts. While victory at Desert Springs would have lifted Tom up one level next year, earning him a place on the intermediate Challenge Tour, this week’s six rounds now offer him an even more powerful launch pad; the opportunity to jump straight onto the European Tour and into the front room of golf viewers, not only across the Isle of Man, but worldwide. One thing is for sure – wherever his golf takes him, he will be proudly flying the Manx flag wherever he goes.

“I’m absolutely delighted with the result and getting through to Final Stage, where my dream of becoming a European Tour player is a lot closer than it ever has been. My great current form has come just at the right time, and I am looking to build on those seven top 10 finishes in my last seven starts. If I can keep that run going, I’ll be a European Tour player for 2020!”