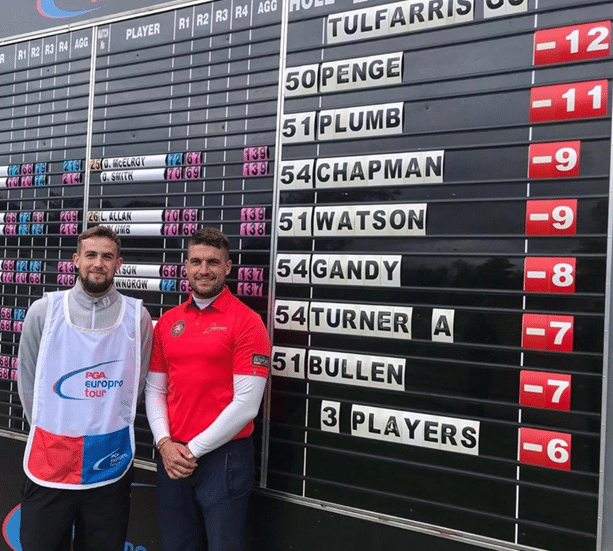 Isle of Man pro golfer Tom Gandy took a giant step towards ensuring that he qualifies for the PGA EuroPro Tour Championship for the second consecutive year with a hugely impressive performance at the Irish Masters event at the Tulfarris Hotel and Golf resort in County Wicklow last week. An 8 under par total of 208 saw him finish in a Tie for 4th place, the best EuroPro result in his career so far and enough to catapult him from 70th place in the Order of Merit up to 41st. With the Top 60 all guaranteed a place in the end of season finale in Desert Springs in Andalucía, Spain, in late October, and only two tournaments of the normal season still to play – in Oxfordshire this week and in Aberdeenshire later in the month – this means that Tom can effectively start making his travel arrangements and start to dream of a successful end to the year on a course that his Top 20 finish last year proves he clearly enjoys.

Playing in what he described as “..some distinctly Manx weather…” over the three days, Tom was a model of consistency throughout the tournament. Rounds of 70, 70, and an outstanding final round of 68 saw him get to within two strokes of the lead briefly on the back 9 before running out of holes to catch overnight leader Marco Penge who, after a front 9 wobble, reasserted himself in the final few holes to win by one shot with a 12 under par total.

“It was a good, solid, week…I played particularly well in the final round, and was striking the ball lovely all day, despite some tough conditions.”

For those who like their stats, Tom was Tied 6th in birdies (with 15), Tied 1st on scoring on the Par 3s, Tied 12th on the Par 4s, and Tied 16th on the Par 5s. This consistency and momentum is very timely – not only are the end of season events looming large in the minds of all the players, but also the small matter of the Annual Qualifying opportunity for the full European Tour – known colloquially as ‘Q School’ – which is the holy grail for aspiring European Players. Here, they will fight for the opportunity to rub shoulders with Rory McIlroy, Justine Rose, and Tommy Fleetwood at all of the major events over the 2020 season. Tom’s journey on that particular adventure starts in Golf D’Hardelot in France on the 9th of October, hopefully culminating in a successful campaign at Lumina Golf Club in Tarragona, Spain, in mid-November.

Despite earning his maiden victory in a Jamega Tour event back in May, the PGA EuroPro Tour represents a distinctly higher level of competition and last week’s great result is Tom’s first Top 5 finish in one of these events. This is all the more significant as the Top 5 players all earn Official World Golf Ranking points, meaning that Tom has earned his first point on the very top level of internationally recognised golfing excellence. For any statistics addicts out there, if they were to google ‘OWGR’ this week and search for Tom Gandy, they would find him sitting a dozen or so place above a certain Fred Couples – proof that as the old guard gradually fade away, there are always rising stars on hand to take their place.

The next one just might hail from Rowany Golf Club on the Isle of Man….