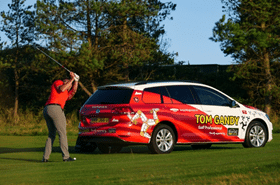 After a successful month on the European Tour in August and September, followed by a well-earned break back on the Island, Isle of Man golf star, Tom Gandy, was back in European Tour action last week at The Scottish Championship. Hosted by the Fairmont resort and course at St Andrews, the weather may have been a far cry from the sunshine he enjoyed at his last two events in Spain and Portugal, but the Manxman was in no mood to lose the momentum he had built up on the continent and played his way to another fine finish at the home of golf.

A fast start on Day One ensured that the Manx flag made an appearance on the leaderboard and, despite the cold and sometimes wintery conditions, Gandy managed an impressive haul of 17 birdies over the 4 days. Rounds of 70-73-73-68 saw the 2020 Isle of Man Sports Ambassador of the Year end the week on a 4 under par total; enough to secure a Tied 51st finish.  What is more, the former Isle of Man Champion seems to be growing in confidence with every event he plays, as he starts to look more and more comfortable competing with some of the world’s top players.

“It was great to be back out there after four weeks off due to the self-isolation rules on the Island – and nice to get four more rounds under my belt, ending positively with my lowest round of the week.”

Despite the restrictions to the schedule caused by the Covid pandemic, the European Tour have done an outstanding job, managing to resurrect much of the season. Gandy is taking full advantage, and last week’s event in Scotland was his seventh outing on the full European Tour. With his entry now confirmed for this week’s Italian Open, there is a strong possibility that the man from Rowany will get into double figures before the end of the season – an impressive total, considering that he expected to be playing most of his golf in 2020 on the Challenge Tour – one tier below this top level.

One unintended consequence of this is that his very distinctive car is logging considerably fewer miles this year; it is spending a little less time on the road and a little more time parked at or near to Manchester Airport. In just 12 months, Gandy has moved from competing on the EuroPro Tour with events almost exclusively in the UK, to a schedule that has already taken him all around Europe and South Africa. This international focus continues over the next 8 weeks, with a host of event options on Tom’s radar after Italy. These potentially include tournaments in Cyprus, Spain, the Middle East, and South Africa, all before the end of the year.

Gandy will again be aiming to carry the Manx flag up the leaderboard this week, as he continues to ply his trade against some of the top names in golf at the Chervo Golf Club, San Vigilio di Pozzolengo, in Brescia in The Italian Open. His opponents include major winner Martin Kaymer, former world number one Lee Westwood, and Ryder cup stars Jamie Donaldson, Eduardo Molinari, and Thorbjorn Olesen among another quality field.

You can follow his progress in The Italian Open on the European Tour App or website (https://www.europeantour.com/european-tour/). He tees off at 9.12am (local time) tomorrow and is playing with Aaron Cockerill and Matthieu Pavon.