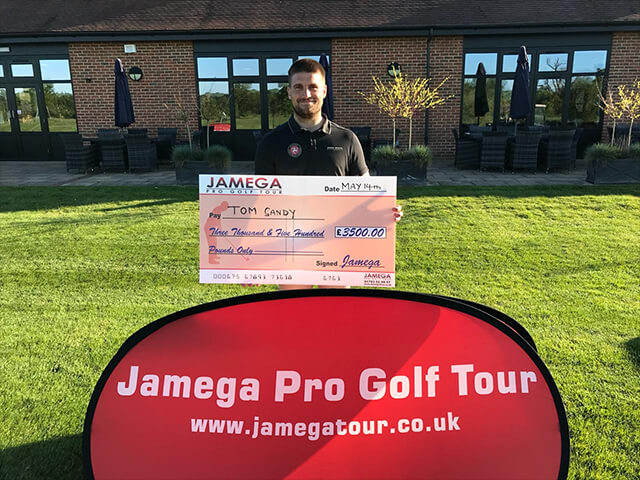 Whether you are talking about Horse Racing, Athletics, or Golf, they say the hardest way to win in sport is often from the front.

If this old adage is true, then Isle of Man golfing star, Tom Gandy, certainly chose the hard way to gain his maiden victory as a professional this week at the Jamega Tour Royal Ascot Cup, held at the Royal Ascot Golf Club in Berkshire. Enjoying some welcome sunshine, a combination of commitment, grit and sheer brilliance saw Tom convert a first round lead gained via a stunning six under par 64 into a hard-fought victory with a spectacular birdie at the first play-off hole. This well-deserved success is the culmination of a winter spent on the Island where a focus on serious practice – including getting acquainted with the new Mizuno clubs he will play in 2019 – and steely commitment, and lays down a serious marker for Tom’s potential, and ambition, for the coming season. This follows a highly successful first season of competition on the EuroPro Tour in 2018 which saw him score 6 Top 25 finishes en-route to a 42nd Place finish on the Tour’s Order of Merit, earning him a spot at the end of season Championship on Spain where he finished a very creditable tie for 18th.

Tom’s final build up to the 2019 season began last month where he blew away any remaining winter cobwebs with solid Top 20 finishes in each of his two starts on the Portugal Pro Tour. Following a week back at home on the Island, his first UK event last week was cut short by some unseasonal weather, with flooding restricting the event in Oxford to a single round and denying Tom the opportunity to build on a solid first round of level par. However, there was no such steady start to this week’s event as Tom blasted out of the starting blocks with an opening round that contained 7 birdies and saw him carry a one stroke lead into the second day. It was not all plain sailing for the Manx star on day 2, however, as a combination of only a steady opening 9 holes, and some great play by some of his competitors, saw him make the turn 3 shots behind and with some work to do. However, the man from Rowany proved more than equal to the task with birdies on the 12th, following a great wedge shot to 12 feet, and again on the 16th, with a perfectly weighted putt, putting him back in control and needing a very makeable birdie on the Par 5 18th to seal his maiden victory. Unfortunately for Tom, his birdie putt came up agonisingly short, leaving him facing the prospect of a sudden death play-off against England’s Jamie Moul for the title.

The tension mounted as Tom lost the coin toss and had to watch his opponent have first shot into the Par 3 play-off. However, this worked in his favour as, influenced by watching Jamie’s iron shot, Tom revised his club selection and elected to grip down on a 6 iron, rather than try to hit a hard 7 iron, and made a perfect swing, sending the ball straight towards the hole.

“I prepared myself and then hit a great iron shot, straight at the flag to a mere 3 feet – almost tap in range. I had two putts to win from here and managed to roll the first one in to make birdie and win the tournament.”

This maiden victory for Tom represents a great start to the 2019 season as he looks to build on the strong foundations he laid in his rookie year. Beating over a hundred other golfers at this Jamega Tour event reinforces just how competitive he will be over the coming months where he will look to translate this combination of form and confidence into similar results on both the EuroPro Tour and, hopefully, the next level of competition on the Challenge Tour where he had been invited to become and Associate Member.

In addition to being outstanding news for Tom, this win is also a great start to the season for the select band of proud Island companies who are generously supporting him for the coming season. These companies range from well-established Isle of Man brands, such as Tower Insurance (through the Isle of Man Sport scheme), SteamPacket, and travel firm Visit IOM, to some smaller companies such as ScottyDogGolf , Isle of Man Golf Holidays, and even the latest small business to grace Port St Mary, The Sugarloaf Café. Working through a combination of season and event sponsorship agreements, these Island firms’ support for Tom will ensure that he can fund his travels for the coming season. For their part, their association with Tom offers a fantastic opportunity to take their brands and logos on an exhilarating global journey, with the possibility of Tom being invited to fly the Manx flag as far afield as Finland, Morocco, and even China on the Challenge Tour.

However, for now everyone on the Isle of Man will just be delighted to see their flag at the top of the Leaderboard this week in Berkshire.